Select the Right Microvia Aspect Ratio in Your HDI PCB

The use of microvia technology has contributed to the miniaturization of PCBs and allowed engineers to become more creative with their designs. The world of integrated circuits would not be possible without the use of microvias. In fact, the reliability of HDI boards is directly related to the aspect ratio of micro via PCB.

Microvias arguably play a critical role in HDI PCBs because they facilitate routing throughout the board. This is why it is important to carefully select the right aspect ratio of microvias to improve the longevity and functionality of  HDI PCBs.

Microvia refers to any via that has a diameter less than six mils. IPC standards have provided a more formal definition of microvias that also considers their aspect ratio. According to the IPC, a microvia is any structure with a maximum aspect ratio of 1:1 with a depth of 0.25 mm.

This means we must consider both the diameter and aspect ratio of the vias before we can classify them as microvias. The aspect ratio limits where microvias can be used on the HDI PCB, the components they can connect to, and their size.

Standard HDI PCBs use microvias with a core layer stacked with prepreg layers. The outer layers support buried vias, holes, and microvias. However, the core layer is so thick that it simply won’t meet the aspect ratio limits of microvia structures. This means that only a drilled buried via can be placed within the core layer.

Micro via aspect ratios is calculated as follows:

In other words, the aspect ratio depends on both the copper weight and the dielectric thickness. According to the formula, it is possible to use microvias with a larger diameter while staying within the target aspect ratio, provided that the copper foil is thick enough.

The most important design consideration in HDI PCBs is to select an aspect ratio that will improve the quality of the board and ensure its long term reliability. This is important because the IPC has issued reliability warnings about using microvias with large aspect ratios in stacked PCBs.

Microvias with a large aspect ratio may be susceptible to failure during reflow cycles. This prompted the use of thinner copper foil, larger microvia diameter, or both. The aspect ratio presents a challenge to fabricators, and staying within the desired aspect ratio requires choosing the right drilling process to keep expenses down. 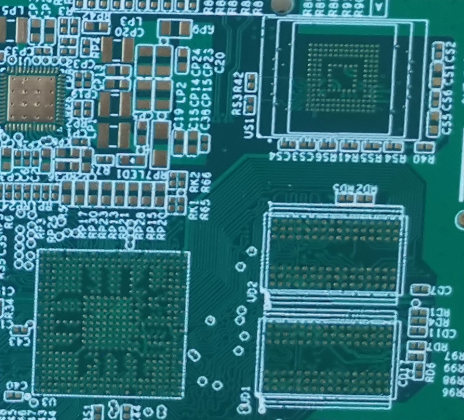 Before we can determine aspect ratios of microvias, we have to first design the PCB stack. This means that the designer must determine the layer count that is to be used for supporting BGA fanout and routing them into denser components, especially fine pitch BGAs. Only two parameters are important for microvia sizing:

The number of thin outer dielectrics in an HDI PCB can be determined by looking at the ballout on the largest BGA component. The number of column and row groups can be used to arrive at the total layer count that is needed in the HDI stackup.

Once we find out the number of layers, we can compare it with the total thickness and select a dielectric material suitable for HDI routing. It is strongly suggested to use thinner dielectrics with high speed devices.

Once we know the thickness of the layer, we can place an upper limit on the aspect ratio of the microvia. This will ensure board reliability and prevent the pads from interfering with the routing, but they will be large enough to meet annual ring requirements.

Pro tip: For reliable connections with BGA components, designers should select the pad size such that they fit the pads between or under the solder balls on the finest BGA.

Note that the aspect ratio limit will depend on various factors such as the application itself, the manufacturer’s capabilities, and whether you are planning on soldering on the microvia.

Microvia aspect ratio should be selected to withstand reflow processes without cracking at the neck or the base.

This is why we recommend talking to your fabricator before you work on your HDI PCB stackup. Every fabricator works with different aspect ratios. This will affect the board’s reliability and whether it will pass reflow successfully.

Mechanical drilling is used for placing microvias with a larger diameter. It does not place any limit on the aspect ratios.

Laser drilling is preferred for fabricating microvias with smaller diameters. The laser beam's depth of focus allows the microvias to have an aspect ratio of 1:1 or less. The aspect ratio depends on the diameters of the via hole and the drill depth. Some structures may require multiple laser hits with a smaller risk of misregistration than mechanical drilling.

In the case of internal buried microvias, it is impossible to use thicker copper to increase the aspect ratio of the microvia. This is because the neighboring prepreg layer may not completely fill up voids near the microvia's land while pressing, especially when the resin content is very low.

Choosing the right aspect ratio is important when designing IoT applications. Make sure to choose an experienced fabricator that knows how to deal with HDI PCB boards, microvias, and various design challenges.

Hemeixin PCB works with many industries and specializes in modern PCB design with exceeded technology. Get in touch with their consultants today for more information.