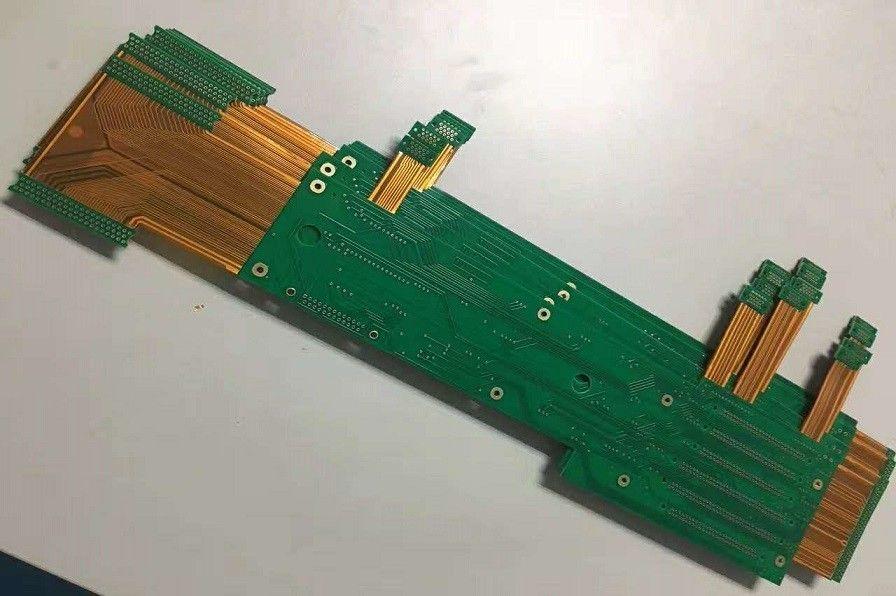 Rigid-Flex PCB manufacturing and designing is no longer a novelty in the world of PCB. Rigid-Flex PCBs have been in play for decades now. But that doesn’t mean the evolution and improvement of the processes have stopped. On the contrary, Rigid-Flex circuits are improving at a much faster rate than they were a few years ago. That’s mostly in response to the ever-increasing demand for compact and durable circuitry.

The process is divided into several parts. And just like it may vary from vendor to vendor, it varies in terms of the complexity of the circuit. Also, when only a few Rigid-Flex PCBs need to be made, like for a prototype circuit, a lot of manual processing is involved in the manufacturing process. But for a large number of circuits and bulk production, the majority of the process is automated.

The very first step would be the material preparation. Two base materials, the rigid and flex substrate, are prepared separately. The flex and rigid PCB circuit boards are cut out into the desired shapes.

Here, it would be important to understand that a Rigid-Flex is made step by step, and the first steps deal with completing/manufacturing the flex part of the circuit to a certain extent.

The flex part of the circuit is pre-cleaned after cutting. This pre-cleaning is imperative because the copper layers, that are pasted to the flex substrate (Usually polyimide), usually come with anti-tarnish features. These, while great at keeping oxidizing agents at bay, also prevent proper etching of the circuit pattern film on the copper surface. Also, no dust particle can be allowed to be present on the copper surface. The chemical cleaning usually ensures that the surface is perfectly clean and ready.

For some circuits, the flex part of the circuit needs to be drilled for holes that will only be on the flex and won’t go through the combined (sandwiched) part of the Rigid-Flex constructions. Some manufacturers may do it before the cleaning.

Then the dry photoresist film is placed over the copped-clad laminate. Then a UV light transfers the pattern from the photomask to the laminate. The film is chemically separated from the laminate, leaving the pattern behind. This is the conventional, and still the most commonly used method. Another method is screen printing. It has the benefit of transferring the pattern directly onto the laminate. In both cases, usually, both sided of the circuit are simultaneously treated if it's a dual-sided circuit.

Next is the process of etching. It “etches” the circuit pattern on the copper, and removes the remaining copper off of the surfaces of the flex.

At this point, the coverlay pasting is done. Coverlay is cut and drilled beforehand (to match the drilling pattern of the flex substrate). Then coverlay is laminated to complete the flex side of the circuit.

The rigid part of the Rigid-Flex is preprocessed following the same steps that the flex is. It’s cleaned using the chemicals. And if a multilayer PCB is to be formed, then the rigid substrate may be patterned and etched the same way as the flex was, for the inner layers. If components need to be installed in the inner layers as well, then the process may be different and a bit more complicated.

One part that’s different in the rigid part of the PCB is that it has to cut to accommodate the flex part of the circuit.

After the rigid and flex parts of the circuits have been prepared separately, they are laminated. This lamination is basically the fusion of the two parts together.

After that, the physical combination of the Rigid-Flex PCB is almost through. The next part is plated through-hole drilling. Through holes are still drilled using mechanical drills, capable of punching through all the rigid and flex layers in one go. Consequently, they have to comply with an aspect ratio limitation so that they don’t undermine the mechanical limitations of the circuit, especially in flex parts.

After drilling comes the part of the plating of the holes, it has to be done very carefully and accurately, because improper copper deposits can cause shorts in the circuit, and an uneven distribution increases the probability of fractures in the copper. After that, the copper is chemically plated.

Now the other layer dry film is deposited on the surface of the circuit. Like before, the circuit is run through a UV chamber to lay the print on the circuit. Then it's etched to leave the copper traces behind, and the rest is stripped away.

Then the surface is treated for the final formation. One of the methods it’s done is by OSP, or organic solderability preservatives deposit on the copper surface. It’s also called anti-tarnish. It makes sure that the copper on the surface is not oxidized when it comes in contact with the oxygen in the atmosphere. It’s deposited through adsorption.

After the surface finish processing, the circuit is milled, molded, electrically tested, and then packaged for shipping.

The manufacturing process to produce cutting-edge and effective Rigid-Flex circuits is constantly changing and made better. Rigid-Flex PCB manufacturing is a complex process, and it can be significantly different for different designs. What designers need to take away from that is to coordinate with the manufacturers and fabricators beforehand. The earlier they are involved in the process, the better it would be for your circuit. Because it would reduce costly do-overs and redesigning circuits multiple times. And instead of hiring the services of different vendors for different parts of the process, it’s a good idea to keep everything under one roof.

That means hiring the services of manufacturers who have the experience and rigid flex pcb manufacturing capabilities of realizing a wide variety of your circuitry needs.